Last week, Pune witnessed the greatest annual pilgrimage of Maharashtra – an 800 year old tradition in the honour – Saint Dynaneshwar. It’s a journey of almost 450 kms to Pandharpur, wherein thousands of pilgrims called ” Warkaris” join the spiritual march, in Aashad (the month of June/July). They walk in groups called “Dindis”, with “palkhis” called chariots and padukas “sandals” of the saint singing sacred songs. Every year, this palkhi goes through Pune, where they stop for a day and then move forward to Pandharpur.

Since I was a kid, I have been in Pune and am conversant with this grand old tradition. It’s a phenomenon one should not ever miss, and this year, thanks to my parents, I also walked a few kms as a part of this pilgrimage. It was rejuvenating to be a part of this where everyone come together and are immersed in this spiritual march. It was raining but the warkaris still continued the march. 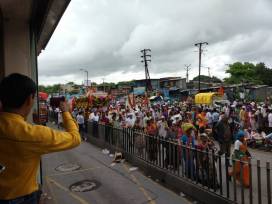 It’s an honour to walk with the warkaris who travel long distance on foot, leaving their homes, with no care of heat, rain, food and water, on their way to Pandharpur. They are not tired or deterred by any obstacle in their path.  One gets to see the kids, the youth and the old come together. Women carry basil “tulsi” plants on their head to offer at the temple. People also walk in groups, carrying musical intruments like local veenas,chiplis and dholkis, singing spiritual songs. Many trucks follow this procession, carrying the belongings of the warkaris.

Pune as a city, gets transformed on the day the palkhi arrives. Millions are waiting for the “Palkhi darshan”. Arrangements for food, stay and first aid are made by various organisations and there are hundreds of volunteers waiting on the way, making sure that the warkaris face no problem on their way. Youngsters belonging to the  I.T. sector had made their own group called “I.T Dindis” to be a part of this procession.

This march ends at Pandharpur, where the pilgrims take a bath in the holy waters of “Chandrabhaga” before visiting the temple. One should never miss this grand annual tradition and strive to be a part of it.

I hope you enjoyed reading this post and would love to see you at the march, next year. Thanks for reading!